Chuck is now an Ecuadoriano!!! 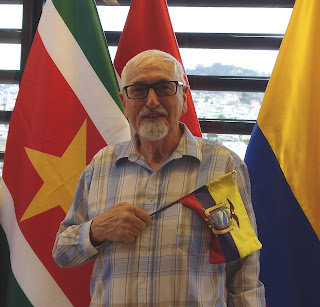 There was a nice ceremony and Chuck sang the Ecuador national anthem.

Love,
Nancy
Posted by Nancy Watson at 4:16 PM 3 comments: Links to this post

Another Great Day Walking in Paris

Paris is a very walkable city.  It is flat, has great sidewalks and many tree lined streets.  Perfect conditions for walking.

Last Sunday we took a stroll of maybe fifteen blocks from our hotel to the heart of the tourist area in Paris.  We walked down the wide Avenue de Opera that connects the Opera House to the Louvre Museum.

This is a picture of the Carrousel arch that is outside of the Louvre.  It is the smallest of three arches along Triumphal Way.  The largest arch is Arc de Triomphe, which we did not see on this trip. This arch was built by Napoleon I to commenorate his military victories.  It was built between1806 and 1808. 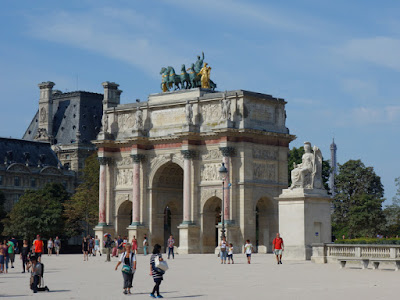 We strolled over to the large plaza outside the Louvre.  The Louvre is one of the most famous museums in the world.  Before it was a museum, the Louvre was the royal palace to the ruling families from 1358 until the French Revolution.

The glass pyramid in front of the Louvre was added about 25 years ago.

We did not try to go inside the museum this visit. The last time we were in Paris we spent a whole day from opening of the museum until closing and still we had not seen it all.  The Louvre is so special that one cannot run in and spend an hour or two and then leave.  So we kept on walking. 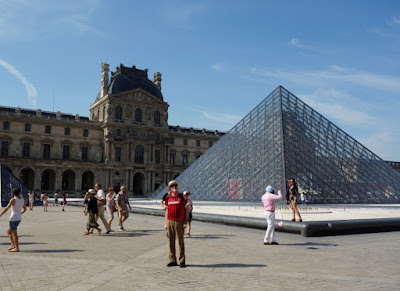 Here is a typical magazine stand along the river Seine.  They have posters, copies of old newspapers, old magazines, photos, and books. 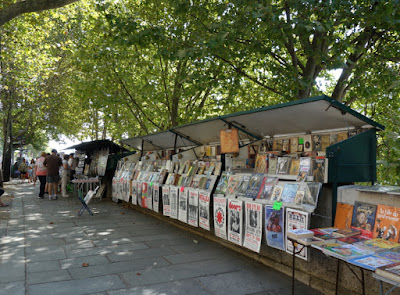 We stopped for a light lunch.  Chuck had a salad of young greens, parmasean cheese and mushrooms on top of thinly sliced raw beef. 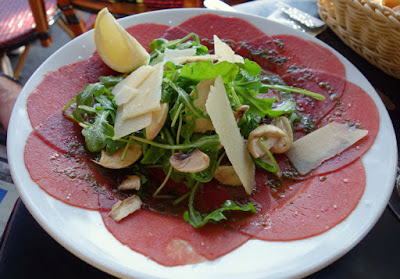 I had my all time light lunch favorite...fried calamari. 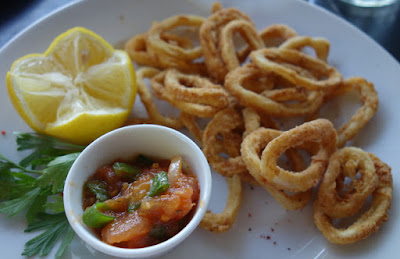 After lunch we strolled over a pedestrian bridge across the river Seine. 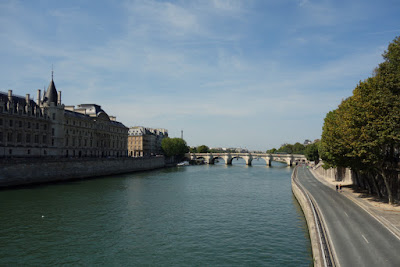 The Consiergerie is a tourist site we had not visited before, so we decided to have a look see.

The Conciergerie is a former prison.  Before it was a prison, it was a royal palace of medieval kings of France from the 10th to the 14th centuries.  This is a very, very old building.

King Charles V abandoned the palace in 1358 to move across the river to the Louvre.  I can't much blame him since this building had no running water. 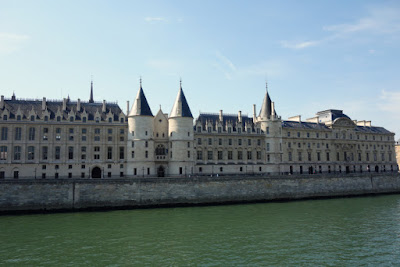 France's first public clock was installed on the side of the Conciegerie in 1370. The clock in this picture is a replacement to the original clock.  The current clock dates from 1535. 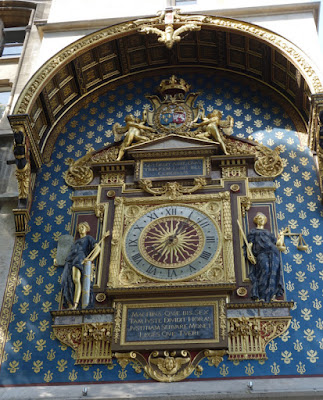 The French Revolution lasted approximately 10 years (1789-1799).  September 1793 - July 1794 was known as the Reign of Terror.  A very dark period in the history of France.  Although this lasted only 10 months, thousands were imprisoned and died by guillotine execution.  The Conciergerie became a holding cell for the prisoners awaiting their execution.  The most famous person to be a prisoner here was Marie Antoinette.

There is a room where a list of the names of the 2780 people condemend to death.  Chuck's mother's maiden name is Parmenter.  Chuck found a Parmentier listed on the wall. 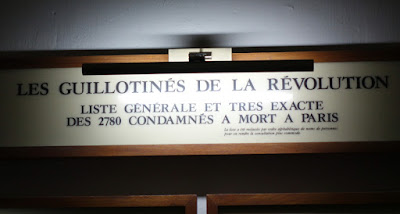 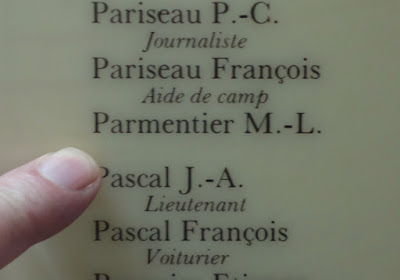 This is a view of what Marie Antoinette's cell looked like. 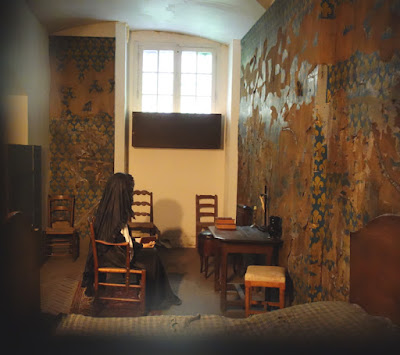 While the Conciegerie was still the royal palace, King Louis IX - 1214-1270 (know as St. Louis) added Sainte-Chapelle (Saint Chapel).  The reason he had this chapel built was to house a relic purchased from the Crusades.  The relic?... the claim is that it is the crown on thorns that was placed on Jesus' head.

The outside of Sainte-Chapelle. 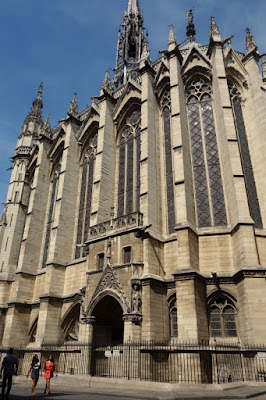 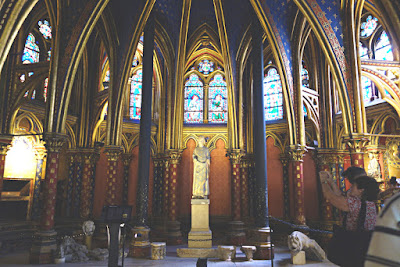 Upper level for the aristocrats. 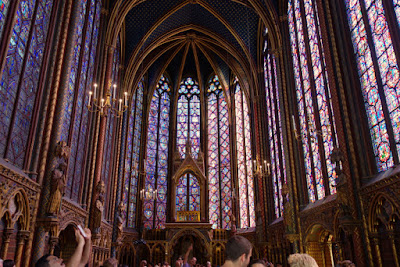 After a couple of hours of French history we continued on our walk.

We ended our walk at a Sunday bird and fish market.  At this market they sold exotic fish and birds and all the things you need to raise them. 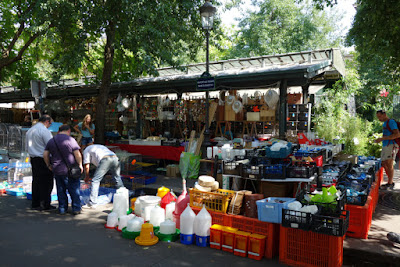 Here is a tank of fish....these are not so exotic...but fun to look at. 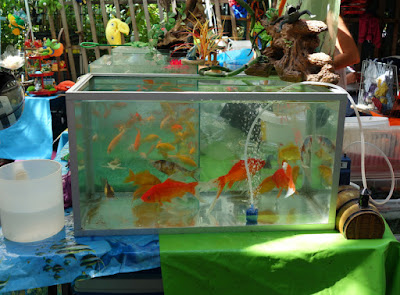 My grandmother, Mama Jessie, had a parakeet.  His name was "Pretty Boy." She taught him to say a few things like "Kiss your mama."

The story I always heard was that she and my grandfather were having a disagreement and voices were raised.  Out from the other room came "Pretty Boy" saying "Kiss your mama." 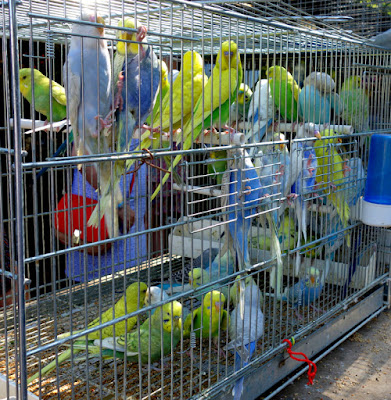 This large Macaw was the center of attention.  I don't think he was for sale.  He seemed very attached to his owner. 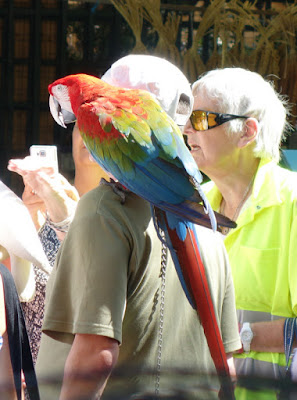 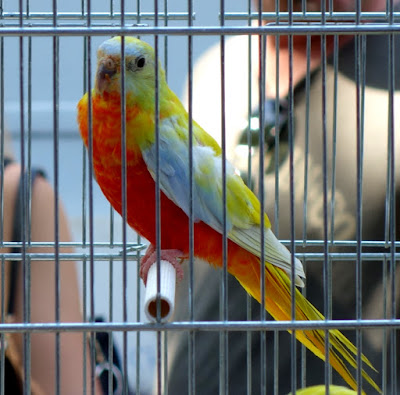 The birds were beautiful to see but in my heart I felt so sad that they were not in their natural habitat.  After visiting the prison I really was sorry for these beautiful creatures who will be caged for the rest of their lives.