Chuck and I went to one of our favorite restaurants today for lunch. As usual the meal was outstanding.

We ordered three entrees to share between us. We had more Nan (Indian bread) than we could eat. The sauces were wonderful as usual.

We noticed that the owner is busy decorating the restaurant. Here is Chuck admiring the new lighting as we waited for our order to be served. 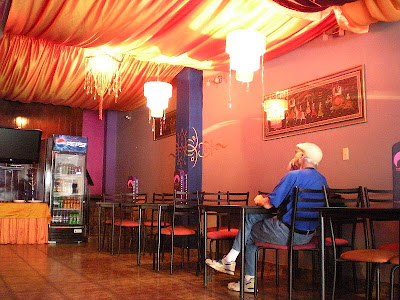 When we complimented the owner on the decor, he invited us upstairs to see what he had done. Wonderful! It was hard to believe we were still in Ecuador when we saw what he had done. Chuck and I are anxious to gather up 4 - 6 more people and use this special area for dining. 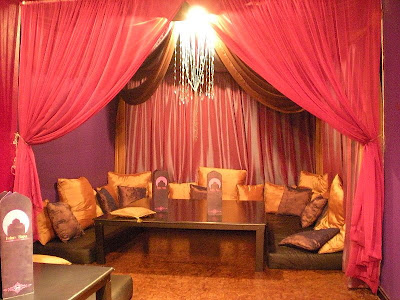 Indian Bapu is located on Calle Larga. It is east of the 10th of August market by about three blocks. It is located on the same side of the street as the market.

We really like this restaurant and now it will be even more fun to eat there.

Cows and Scrambled Dogs - Why I Love Ecuador

Today is "Fat Tuesday" or here in Ecuador they just say Carnival.

Chuck and I are pretty much staying close to home today. One reason is that going out would almost guarantee that we would get soaking wet from water bombs (balloons filled with water) being thrown at us. The other reason is there is nothing open today. Every business, including the Super Maxi (grocery store) is closed today.

When we were walking home from the bus stop on Sunday, I looked up and was so pleasantly surprised. Luckily, I had my camera on hand. 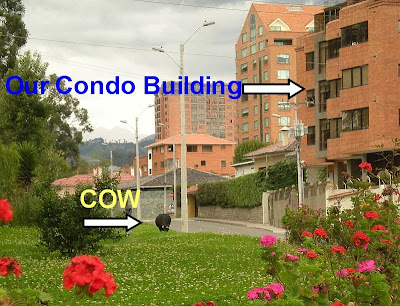 Yes that is a cow crazing in our front yard.

As we got closer we found we had three cows in our front yard. Here are the other two. 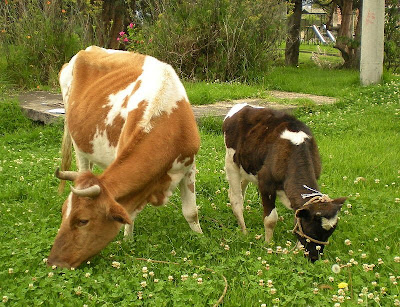 They all three were chomping away at the clover.

Being a city slicker, I was glad to be able to get up close and personal. 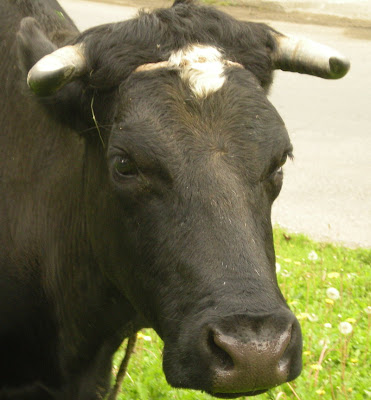 If you have been following this blog for awhile, you may already know that I was born and raised in Columbus, Georgia. There is a special dish that is unique to Columbus. It is called a "scrambled dog." And, although I have not actually lived in Columbus for over forty years, every now and then I get to craving one. 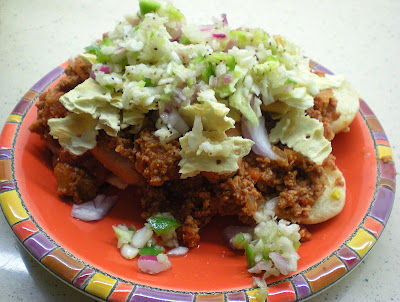 I haven't checked on my neighbors this morning, but I think everyone survived the "dog food."


Update:
We are no longer having to throw a towel over our head when we use Skype. Our computer room has just enough furnishing to absorb the echo. 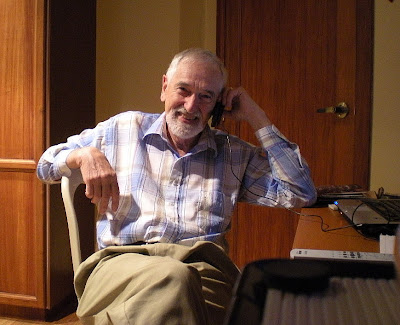 Tomorrow is the beginning of Lent. Hopefully the water bombs will cease and we can once again walk the streets of Cuenca and stay dry.

Nancy
Posted by Nancy Watson at 7:02 AM No comments: Links to this post

It's Carnival Time in Ecuador

Chuck and I are enjoying Carnival here in Ecuador. Here, Carnival officially lasts 4 days, Saturday through Tuesday. It is celebrated different here than in the U.S. Even though Carnival officially lasts only 4 days, it was kicked off here in Cuenca last Thursday afternoon with a parade. The parade consisted of teens from different organizations. Teens here are referred to as (chicos).

KICK OFF PARADE IN CUENCA:

Chuck and I went to see the kick off parade on Thursday afternoon. There were about 1000 participants. It was so much fun to watch these teens. 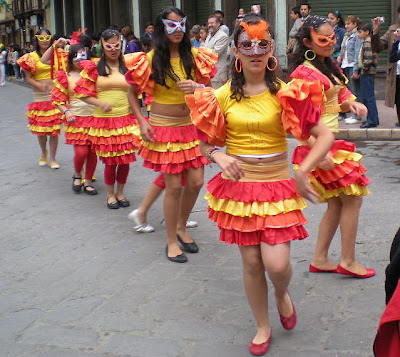 Although they didn't have bands, they had tons of drums. My ears went numb from the noise. 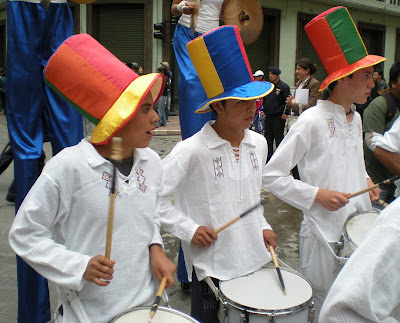 Here is a dancing butterfly. 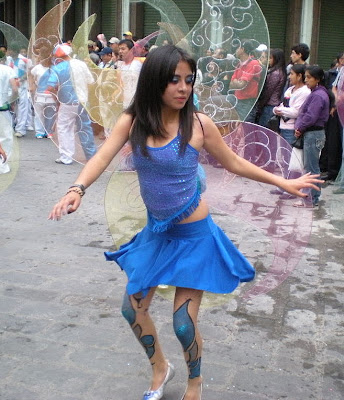 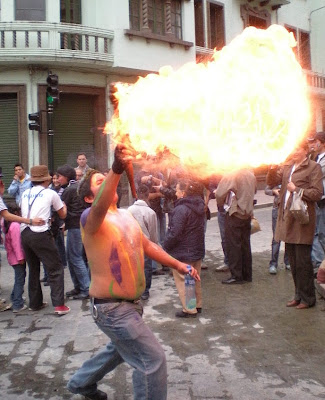 and then there were the kids on stilts. They were very steady on them. As you can see they did many stunts to entertain the huge crowd of onlookers. 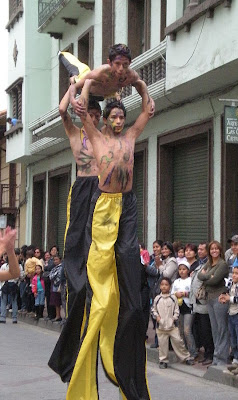 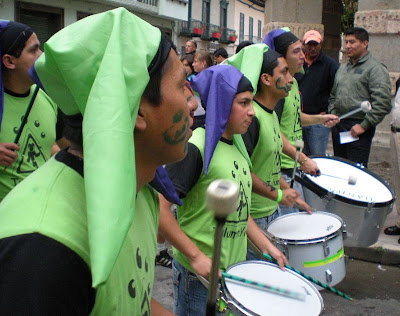 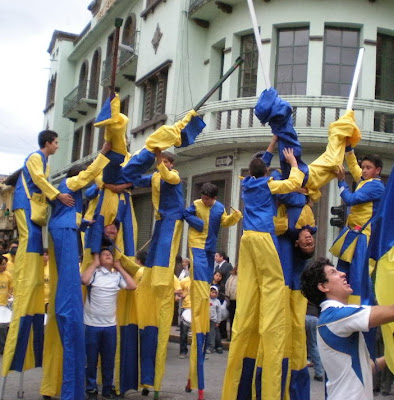 This is one of the youngest of the participants. 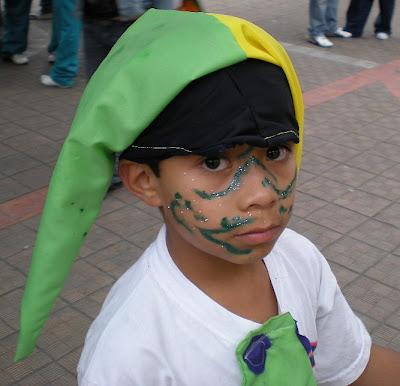 And, of course, there were the vendors selling goodies. 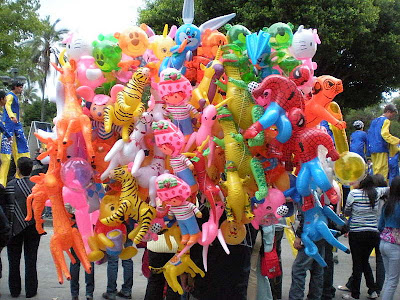 The parade finished at Park Calderon. This is the central plaza in Cuenca. After the parade they had a live band that played Salsa music. Party, party, party.

Today, Sunday, we went to Gualaceo, a small town about 40 minutes from Ecuador. We had read that they were celebrating Carnival there so we went to see how they celebrated it. We invited our friends, Brian and Shelley to come along with us. (Brian and Shelley moved to Cuenca from Vancouver BC, Canada last summer. They have a blog that you might enjoy checking out: www.planetirony.blogspot.com) 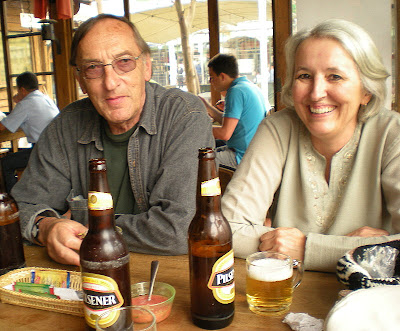 Oops, I almost forgot. Fredi, their little puppy came too. 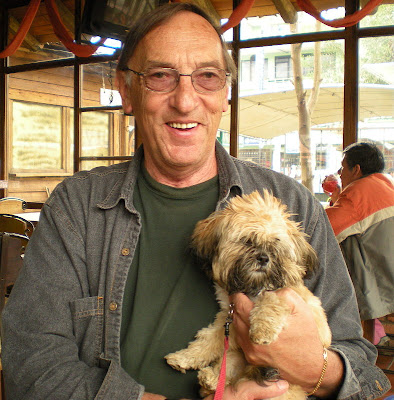 We met Brian, Shelley and Fredi at the bus terminal. We took the intercity bus to Gualaceo. What is normally a 40 minute drive ended up lasting about an hour and a half. The traffic was so backed up. It seemed like everyone had the same idea we had.

The bus put us out right where the action was ... along the river.

In Ecuador, one way Carnival is celebrated is by dowsing others with water, corn starch or spray foam. So it makes sense that the celebration would take place where there is a lot of water.

Here is how Fredi enjoyed the carnival. She rode in her doggie carrier on Shelley's back. She really drew a lot of attention. She is a perfect goodwill ambassador. 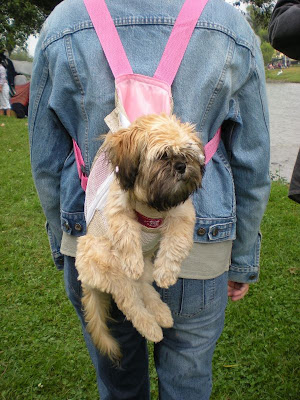 There were many vendors selling corn starch, spray foam and buckets for tossing large amounts of water on each other. 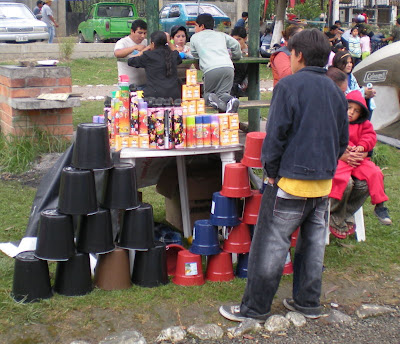 Here is a father and son. They got corn starched. 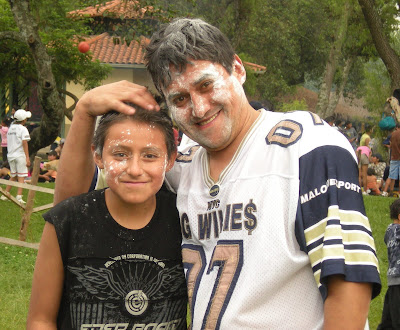 Even we got our share. Here is Chuck just after he was sprayed with foam.

At least he faired better than this guy. His friends are carrying him off to throw him in the river. 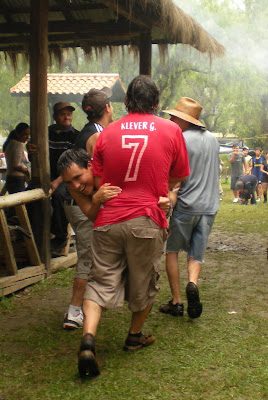 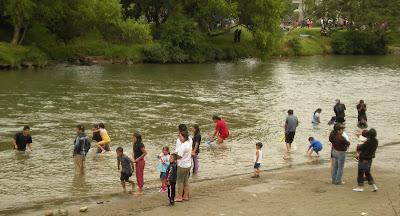 There were even some vendors there from Peru. This lady told me she was from Machu Picchu. 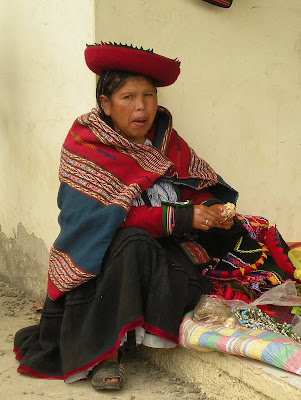 Here are pictures of some of the interesting food that was for sell: 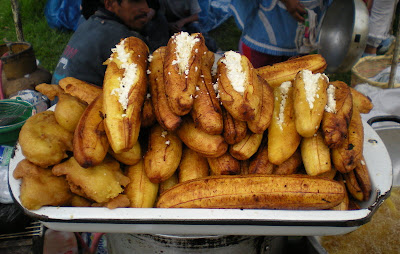 These ladies are cooking Guinea Pigs. A very popular dish here in Ecuador. 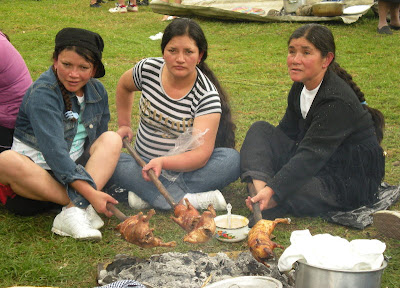 I even spied a some fried chicken. The first I have seen like this in Ecuador. 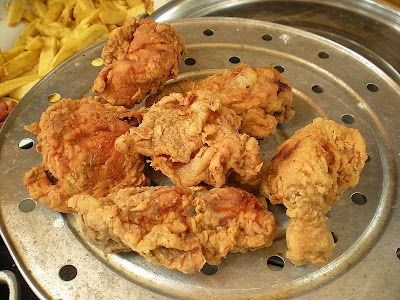 Fruit....here there is watermelon, pineapple and papaya. The fruit was cut up and sold in plastic cups. 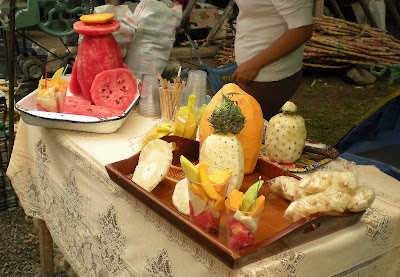 This man and his grandson are making juice from sugar cane. 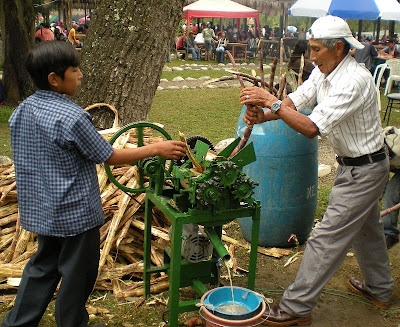 We had a great time.

Most of the wealthier people in Cuenca head to the beach for Carnival. Actually Cuenca is almost dead during this four day period. We figured out that the not so wealthy people head to Gualaceo and other towns to celebrate. It was packed with people there.

I spent all last week at Spanish school. It is coming, but painfully slow.

It is with a sad heart that I share with you that Bill Hirsch died in his sleep about three weeks ago.

I remember the first time that I met Bill. It was in November of 2007. Bill and Christa bought the condo next to the one we were renting. Bill, Christa, Chuck and I became fast friends.