I am sharing this experience because I believe that there could be someone that might learn or be helped from my experience.

I tend to only go to the doctor when I have a real problem.  I hate going on a regular basis because I dislike having to get weighed, learn of my short comings (that is how I perceived it) in taking care of myself.

Last Wednesday I had a life saving experience.  If you know me personally, you are likely aware of my difficulty breathing.  When we first visited Cuenca nine years ago, I noticed a small amount of wheezing when we would be taking walks around town.  Nothing to be worried about because it only happened rarely and only when I was exerting myself physically.

The following year we moved here permanently.  The wheezing, when I breathed, would come and go.  It was more noticeable when I was physically active.  My walking pace slowed because I was not getting enough oxygen.

I did go to the doctor here in Cuenca complaining about my difficulty breathing. He sent me for a chest x-ray, which came back negative for any problems.  He suggested that since I had high blood pressure, this could be effecting my breathing.  I even had a stress test and the doctor who did the stress test told me my heart was fine, but agreed that my problem was due to my high blood pressure.  My doctor even sent me for a breath test which also came back negative.

I decided to just live with it. I assumed that if I could get my blood pressure under control all would be fine.

A couple of years ago, when I was feeling run down and completely low on energy, I started going to a health coach here in Cuenca.  He determined, among other things, that I was extremely deficient in vitamin B12.  We got that remedied and I changed my life style (juicing vegetables, walking more and addressing my mental outlook).  I honestly felt like a million dollars.  BUT, the wheezing continued...sometimes just a little, sometimes more.

I really thought that maybe the wheezing was from the altitude and the air being thinner.  Chuck bought me an oxygen machine.  I used it every day to get the oxygen levels up in my body.

Chuck and I travel a lot.  It became apparent to me that the wheezing was not totally due to the altitude because even at sea level I continued to wheeze.

I basically resigned myself to living with it.  This decision almost cost me my life.

I can only equate this to the frog in the water scenario.  My breathing, over the years, got progressively worse.  It happened so slowly over the years and I was just "living with it."

Last Wednesday, I was on the oxygen machine, sucking in air to breath.  Since I was getting oxygen, I didn't feel like I was in trouble, but I knew that my breathing would not be better ever.

Chuck suggested we try a specialist in lung disorders. I was reluctant and said I really didn't want to go to the doctor.  At this moment, many things happened almost simultaneously.  Lourdes, our housekeeper, overheard my reluctant reaction.  She immediately went to our neighbor, David, and told him I needed to see this doctor NOW.

David, called his doctor and the doctor agreed to see me immediately.

David insisted on driving us to the doctor and waited there while I was examined.

After taking about a 5 minute history, he examined me, had me do a breath test. He determined that there was nothing wrong with my lungs.  He examined my throat and determined the problem was my thyroid.  It was extremely enlarged and instead of protruding out from my neck it had grown inward and was choking off my trachea.

He said the remedy would be surgery to remove the thyroid.  When he said this I started thinking...we have company coming to visit us, arriving today, and more company arriving next week.  Maybe I would get the surgery in a couple of weeks.  This thought never made it out of my mouth, because the next thing the doctor said was. "If I cannot get a surgeon to operate right away, we will do a tracheotomy so you can breathe.  You are at a high risk of suffocation."

I had walked into the doctor's office at 10:00am and I was rolled into surgery at 3:00pm.  Between that time I had blood work, chest x-ray and a sonogram.

My surgery went well, I woke up in recovery experiencing immediate relief.  I could tell that my breathing was so much easier.

The next morning (Thursday) I was released from the hospital and have been recovering very well from the surgery.

I owe my life to Lourdes, David, to a very smart doctor, who was not satisfied until he found my problem, and a very good surgeon.

I do not know how rare this is, but if you are having breathing difficulties, especially living here in Cuenca, don't just assume that it is the altitude.

Now, if I don't get run down by a bus, I am looking forward to many more healthy years ahead living in beautiful Cuenca. 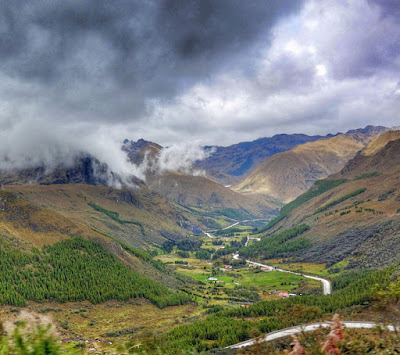 In closing, I will quote the late comedian Minnie Pearl.."I am so GLAD TO BE HERE."

Posted by Nancy Watson at 7:52 AM 8 comments: Links to this post