This is not their real name. I just call them that to distinguish them from the white hat people who live around Cuenca. 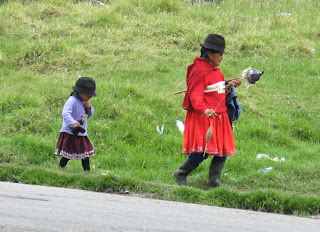 When we were on our way back from Banos, we stopped high in the Andes at a little village for a cup of coffee. As we were sitting outside sipping our coffee, I noticed that all the people of the village were wearing black hats. Around Cuenca the indigenous women wear white hats. I pulled out my camera and started photographing the scenes around me.

In this first picture, this woman is walking along spinning wool. Her daughter is following her wearing the same hat as her mom. The mother is wea 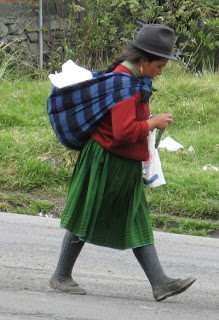 ring rubber boots. This was a common sight up there because the unpaved roads were muddy from frequent rain.

All the indigenous women carry things on their back. The hands are free to doing other necessary things. Most children are carried on their mother's back until they are about two years old.

The scene below was right beside us as we sipped on our coffee. The people on the right are waiting for the bus. They are going to Quito or at least in that direction. 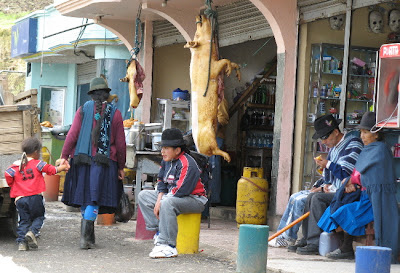 When I was putting these pictures together I went back and viewed some pictures taken since we have arrived and discovered this picture of a black hat woman taken last month in Cuenca. Now I know why her hat was not white. She came from somewhere else besides Cuenca....just like me. 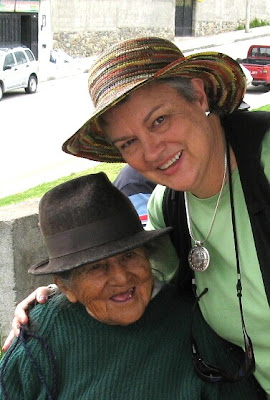 Our sister-in-law is visiting with us this week. She is going to language school half days in the mornings. She will be with us for Thanksgiving.

There is an American owned local restaurant that is cooking turkey, dressing and fixings for all the ex-pats that want to join. We are going to join them on Thanksgiving evening for dinner. That should be fun.

Have a nice Thanksgiving.

Love,
Nancy and Chuck
Posted by Nancy Watson at 11:06 AM