Chuck's Twin Has Been Found!!

I have heard that somewhere in the world everyone has a twin. We think we have found Chuck's twin.

Holly, is a friend we have in Cuenca. She and her husband, Brian live here with their daughter. They moved to Ecuador from Canada.

Holly emailed us this picture a couple of weeks ago. She was looking at some old pictures and came across this one. It is a picture of her daughter and mother and in the background she spotted Chuck. She emailed the picture to us and told us when and where it was taken to verify if it was him.

This picture was taken in Vancouver, Canada in 2007. The funny thing is that Chuck and I have been to Vancouver several times. In fact we are sure that he has stood in that same location. The problem is we were not in Vancouver in 2007.

Chuck swears it is not him. I know for sure that is not me with him. I think it looks just like him. What I want to know is where did he go on that scooter trip he took a couple of years ago? Who is that woman with him? 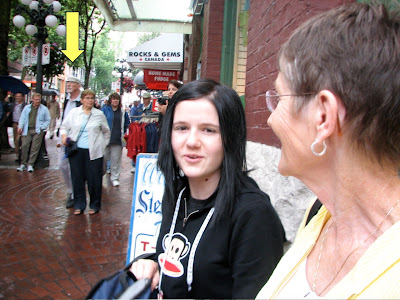 What is your opinion? Should I be hitting him over the head with a cast iron frying pan or acknowledge that he indeed has a twin?


Nancy
Posted by Nancy Watson at 7:38 AM

Email ThisBlogThis!Share to TwitterShare to FacebookShare to Pinterest
Labels: Canada