We boarded the cruise ship, Costa Classica, on Friday, July 17th. Our first port of call was an island off the mainland of South Korea. There seems to be two different English translations for this island (Cheju and Jeju) both are pronounced the same. Cheju Island is located about 40 miles off the south-west coast of Korea. We were told that it is known in Korea for its strong winds, fantastic rocks and its extraordinarily beautiful women.

The island was formed by a now extinct volcano over the course of five eruptions millions of years ago. This volcano is now known as Mount Halla (6,397 ft.) Cheju Island is a very popular place for Korean couples to spend their honeymoon. 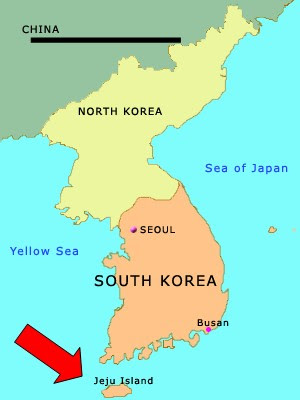 As you know, at each port of call the cruise ship offers tours of that destination. These tours are quite expensive but it is a good way to see a place in the short amount of time that the ship is in port. Chuck and I usually opt out of these tour packages. We have found in the past that if we get off the ship and look around we can find a taxi that will take us to the same tourist sights at a fraction of the cost.

As we got off the ship we were greeted by this Korean drum and gong corp. 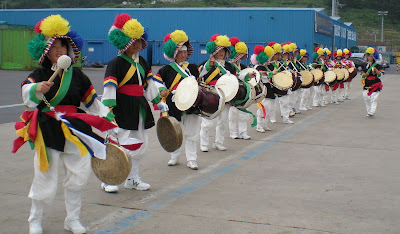 We went through the terminal and we saw many taxis outside. There was one man who seemed to be the taxi captain. He spoke some English. He would negotiate the price and then hand people off to a non-English speaking taxi driver.

Chuck talked to the taxi captain and he said he could give us a complete tour for $8.00. Chuck told him we did not want a complete tour, just a half tour and the cost ended up being $6.00. We were so happy because this was such a GOOD price.

The first place our driver took us was to see the Haenyeo, the women of the sea, who fish for shellfish. Approximately 6000 women are involved in this work. They work without breathing apparatus to more than 50 ft. below the surface, using only goggles and a wetsuit. 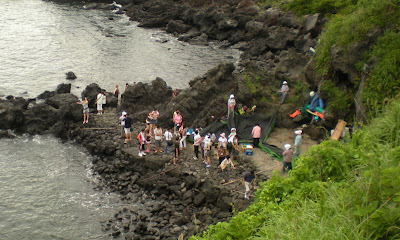 We looked down to see the "working mermaids" but alas, all we could see were tourists.

The next picture is of Chuck and I posing by a replica of a Musin. Musins are statues that are on the island representing the guardian gods. I thought this Musin needed some horns. It is so funny how at the time you think you are being so clever but when you look back at the picture you see how stupid you looked. 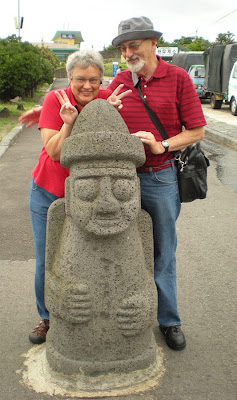 The next place the taxi driver took us was to Mystery Road. Here we are standing on Mystery Road. It is an optical illusion. You think you are driving up hill but in actuality you are going down hill. The driver turned off the car, put it in neutral and we rolled backwards up the hill. 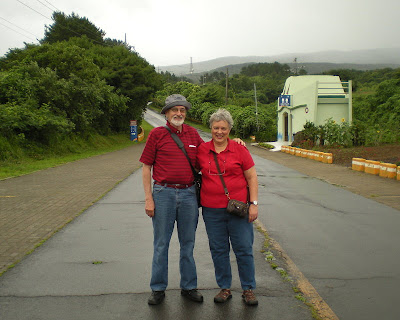 Besides Mount Halla there are many small valcanos on the island. Our driver took us to one so we could walk up and see the crater.

And here it is. We were too close to get a picture of the whole crater but hopefully you can tell it is out there. Chuck climbed up on a tall platform to even get this picture. 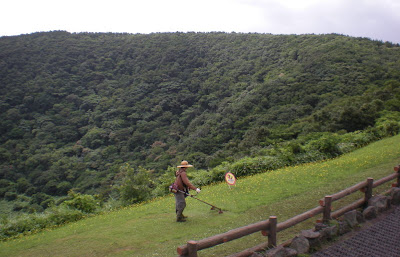 One thing they had on display in this park was a huge rock made out of volcanic material. It had flowed around a tree and the tree had long since decayed. This left a huge rock with a hole in the center. Here is Chuck checking it out. 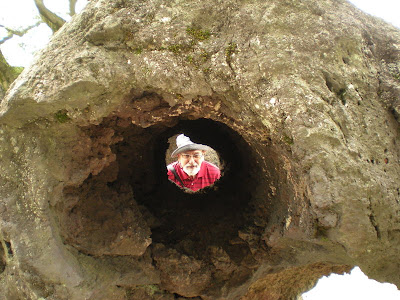 I loved the signs indicating the restrooms. 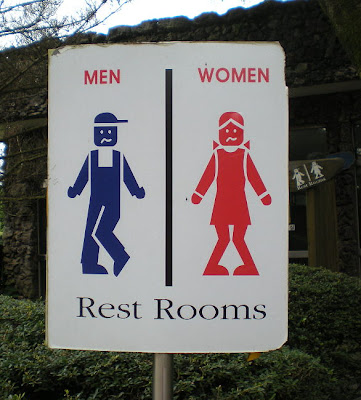 When I got inside the women's restroom I was surprised to see I had a choice of toilet style. The doors on the stalls indicated whether the toilet inside was a western or eastern style toilet. 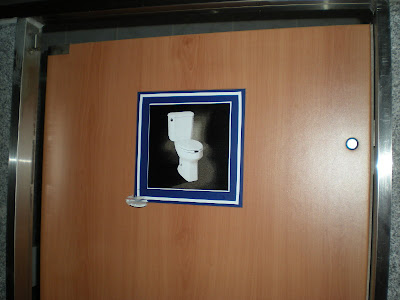 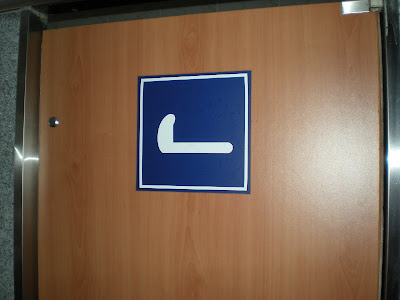 And, if you are interested, this is an eastern style toilet. I call it a squatter.

When we got back into town we asked the driver to let us off at McDonalds so we could get some coffee. I've seen McDonalds all over the world, but the is the first one I have ever seen that offers home delivery. 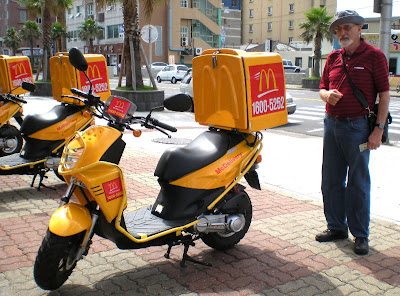 While we were still at McDonalds and not yet back at the ship, Chuck pulled out $10 and gave it to the taxi driver. It was at this point we relized we were being scammed. The driver smiled at the money and said no and whipped out a piece of paper and wrote $60.

I won't write about the conversation that followed. But I was so very very angry. We knew exactly what was going on. I left the scene and went inside McDonalds to cool off while Chuck was left to handle the situation.

In the end Chuck paid the driver the $60. It was a very unpleasant situation and I am sharing the incident so that hopefully this will not happen to others.

We were talking with another couple on the ship that night and they said the same thing happened to them in China. They were told by the pedi-cab driver that the ride would be $4. (The driver held up four fingers and then said dollars). When they got out and tried to pay the driver he quickly whipped out paper and pencil and wrote $40. Like us, they succumed to the scam.

Well at least we have learned our exspensive lesson. In the future we will have our own paper and pen and when we get a price quote we will have the driver write it down for us before we take the ride.

Like China, the weather was overcast, hot and humid. We were glad to get back on the air-conditioned ship.

Nancy
Posted by Nancy Watson at 5:19 AM