Chuck reminded me last week that we have passed another milestone in our Cuenca experience. We have now had our Ecuadorian residency for two years. During the first two years of residency we were only able to be out of Ecuador for no more than 90 days a year. The milestone we passed means that we now free to leave Ecuador as much as we please. For us, this is huge! During the last two years we have butted up to the 90 day limit, being careful to not go over.

Actually, in two more months, we have spent a total of three years in Cuenca. Our adventure here started four years ago, in 2007, as tourists. We liked it here so much that we returned a few months later and rented an apartment for seven months. At that time, we had no intention of living here permanently, but Cuenca drew us in and after living here for seven months we decided to return forever.

Here are some of the changes we have seen during our experience here:

One of the biggest changes is the modernization of the city buses. When we were first here the buses had a driver and an attendant. The buses had the same routes as today, but back then, even though there were bus stops, you could flag the bus down most anywhere along the route. After boarding and finding your seat, the attendant would come to you to collect the fare. He would make change if you didn't have a quarter. In some ways I miss the old bus system. We could get off the bus in the front or back. The attendant would help people on and off the bus when they had toddlers or large parcels. And, the attendant always kept an eye out to make sure the passenger was clear of the bus and tell the driver when it was safe to proceed. One thing that hasn't changed is the bus fare....25 cents and seniors, students or handicapped persons...12 cents.

We remember when the Carolina Bookstore was the ABC Bookstore. Back then it was located directly behind the new cathedral. In 2007, the building housing the bookstore burned and Lee and Carol relocated to their present location and changed the name of the store to Carolina Book Store.

We remember the flower market in Plaza del Carmen before it was remodeled. And, we remember the flower vendors going on strike because they did not like the new kiosks that were designed for them to use. The city had to tear out the kiosks. The vendors moved out of the plaza across the street until they were satisfied with the new design.

We remember when "Gringo Night" was at the Eucalyptus restaurant. In one evening there might be 20 people to gather there. We sat around one long table. The table seemed to grow as each new person arrived. We even knew everybody's name then.

We remember the 9th of October market before it was remodeled. It was pretty much organized chaos. Now it is a beautiful market with a nice plaza in front. The rotary market was remodeled at about the same time.

Chuck standing at the plaza by Iglasea Le Merced on Presidente Borrero and Calle Large before it was decorated with graffiti. 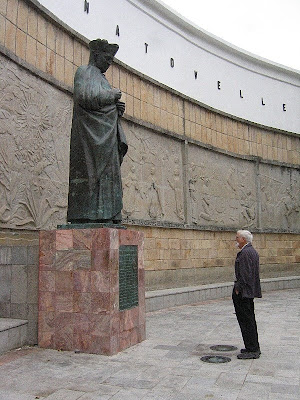 Here is how the flower market looked before the changes. 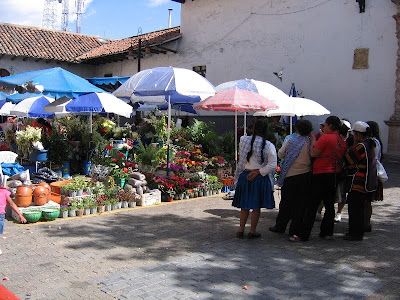 Here is the 9th of October market before it was remodeled. 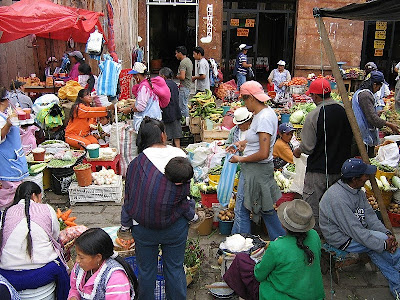 And looking at the price of these eggs, I would say another change we have seen is inflation. Today at the market you can get eggs 10 for a $1.00. 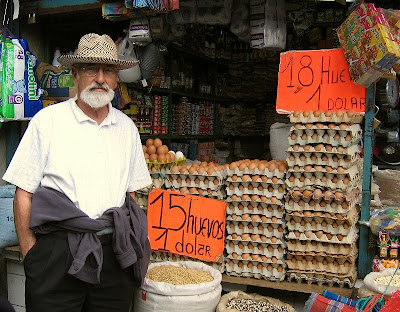 This scene is the same as now and we hope it will always be. I took this picture of the new cathedral in the light of a late afternoon sun, on our first visit here. 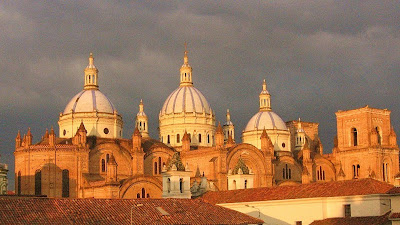 Here is a picture of Chuck and me at the Eucalyptus restaurant during our first visit. Little did we know back then that Cuenca would be our home. 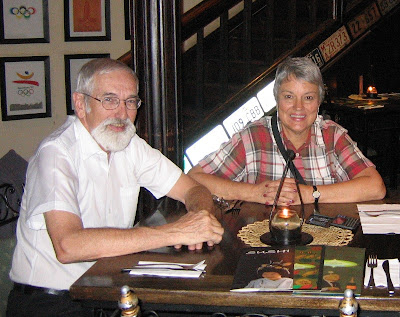 We are so thankful for all the wonderful friends we have made during the last few years in Cuenca.