Visit to Paute, Ecuador (or) How to Treat Your Guests

Saturday we had a new guest arrive. Man (short for Emanuel) is the son of my cousin, Bo. Although we have not actually seen each other since he was about 9 years old, he was very brave to take on unfamiliar relatives during his trek through South America.

We were prepared for him. We have the single bed sofa that arrived exactly one week ago. Good timing!!

David, our next door neighbor, told Chuck and I about a fabulous restaurant in Paute. So, on Sunday, Chuck, Jim, Audrey, Man and I went on an adventure into the country. First we rode the city bus to the bus terminal. There we boarded a bus for Paute. The ride was about 45 minutes and cost us 75 cents each.

We had two objectives: (1) to go to Paute's Sunday market and (2) to try out the Corvel restaurant that David suggested.

I will share about the market experience in my next blog. For now I will tell you about our Corvel restaurant adventure.

The restaurant had indoor and outdoor seating. We were a little early (about 12:30), Ecuadorians tend to eat a little later. Since we were early we were able to select a nice table outside. 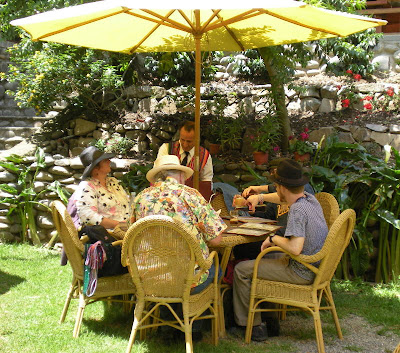 Jim, had the Sunday buffet. Audrey had a seafood soup. I had coconut shrimp. Chuck and Man went for the steak.

I intended to take pictures of the dishes, but I was so hungry I forgot to do it. The food was beautifully presented. Chuck and Man said their steaks were very good and my shrimp were delicious.

Next time I will try to restrain myself from eating until after I have made the photographs.

There was a roving singer. I do not know if this is a Sunday only touch or if he is there every day. It was a really nice experience. 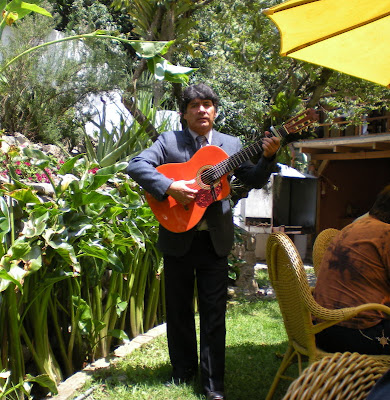 This is our waiter. Notice his colorful vest. This material is used in Ecuador to make tablecloths. 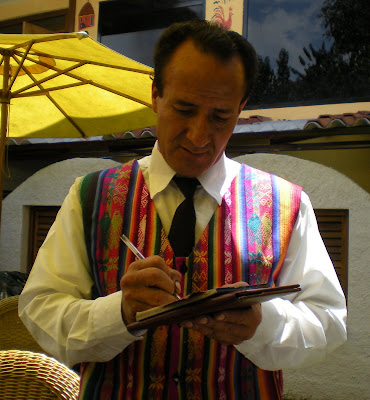 Here is Man. Yes, he is wearing the same hat that the black hat people wear. He bought it on his way down from Quito. Doesn't he look dashing?? 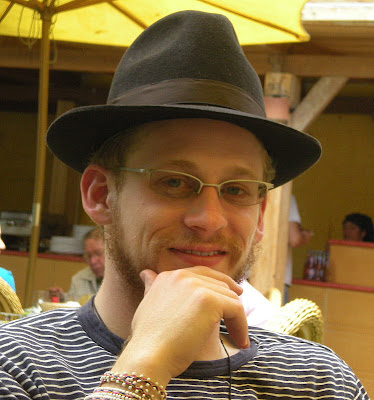 After lunch, we walked through the town square to get to the bus terminal. When we arrived, there was a bus all filled with people. The only problem is that this bus was going to Cuenca and we knew if we got on, we would have to stand up all the way home. We are adventurous, but not that adventurous. We decided to wait for the next bus.

Here is a picture of the bus before it left the terminal. There was a man selling ice cream cones and he was doing a good business. I enjoyed watching the baby girl monitoring the situation out the bus window. 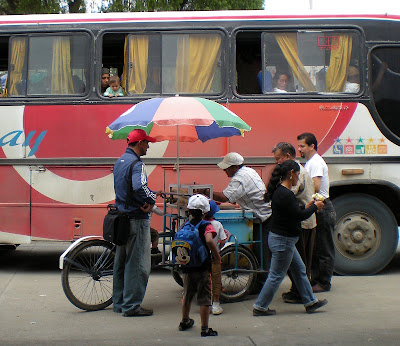 Soon, Man spotted a Mixto (taxi-truck) across from the bus terminal. He said he would love to ride in the back, so we all agreed. Here we are loading up for our trip back to Cuenca. Jim wasn't finished with his cigar, so he decided to ride in the back with Man. 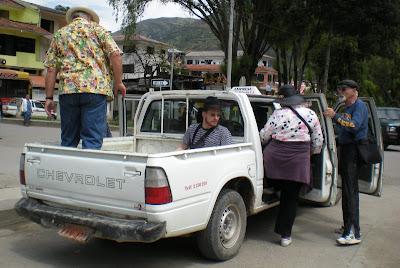 The Mixto took us to the city center of Cuenca. We then went to the Frutilado and had a second dessert.

As you can see, we make sure our guests get "first class" treatment.

And, to see Man's pictures of his South American adventure click here.

Next the Paute Sunday market.

Email ThisBlogThis!Share to TwitterShare to FacebookShare to Pinterest
Labels: Every Day Life in Ecuador, Family