We now have a new TV - and a new President

When we lived in Richland, WA, Chuck and I had a television but we did not have cable. We only used our set to watch DVDs. We listened to NPR (National Public Radio) to get the news.

Since we have been in Cuenca we have been looking at televisions. We need to have one for watching movies down here. Last week we started shopping in earnest because we wanted to be able to watch our new President be inaugurated.

On Monday, the day before the inauguration we went to the store that had offered us the best deal on a television. We bought a 46 in. Sony HD flat screen television. (We want to be able to see the movies real good!) 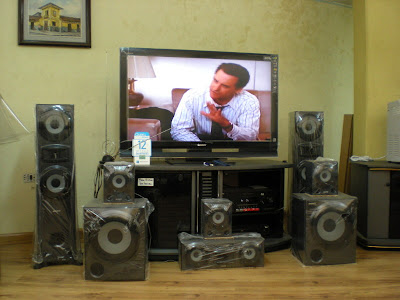 After about 30 minutes she said it was ready to go. She said we could ride with the driver to deliver the television.

We went outside the store and found a boxed up television ready to be delivered waiting in the delivery truck.

Yep, this is what we saw. 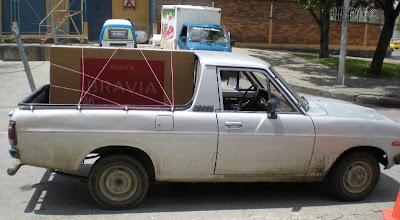 The driver explained that the front of the truck only had two bucket seats. 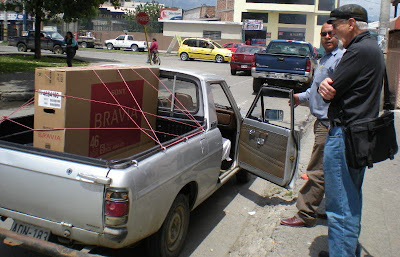 I looked at Chuck and shrugged my shoulders. Chuck, being the wonderful husband he is, said "Get in the cab, I'll ride in the back." And, this is how Chuck made sure our television was delivered to our condo safe and sound. 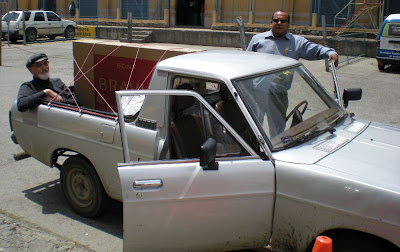 Since only the TV was tied down, I worried a little about Chuck as we hit potholes. I kept a watch on him out the side mirror. He seemed to be getting along fine back there. 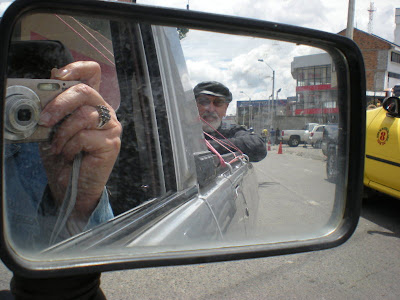 We got home and the delivery man brought the TV into our condo and set it up. We actually had our television in our condo by 12:00 noon as I had requested. What a kick!!

As part of our internet service we have cable TV also. As expected, most of the stations are in Spanish but we do get CNN International.

On Tuesday, five of us (Chuck, me, Audrey, Jim and our wonderful neighbor, David) set around the television to watch as Obama was inagurated President. What a wonderful experience to be able to watch it live.

Afterwards we toasted with champaign and had a luncheon in honer of our new president.

Here is Chuck posing with our new television in our media room. 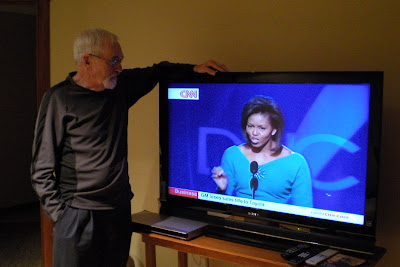 Slowly but surely we are getting our condo furnished.

Nancy and Chuck
Posted by Nancy Watson at 7:55 PM