Chuck, Matt and I enjoyed our stay in Deadwood, SD.

When one thinks of Deadwood three things come to mind....Gold, Hickok and Gambling.

Actually, these three things, pretty much in this order, made Deadwood the popular tourist attraction that it is today.

In 1868 the Treaty of Laramie was signed giving the American Indians this territory, however in 1874 an expedition led by Col. George Custer found gold in this area.  This gave rise to the Black Hills Gold Rush.  So what it comes down to is that this land legally belongs to the Lekota Indians.

The gold rush gave rise to the lawless town of Deadwood.

On August 2, 1876, one short month after his arrival, Wild Bill was playing poker at Saloon No. 10.  Hickok always sat with his back against the wall when playing poker.  On this day the only seat available had Hickok with his back to the door.  Jack McCall entered the saloon and pointed a gun to the back of Hickok's head and shot him.  In his hand Hickok was holding two black A's and two black 8's and another card.  This has become known as "the dead man's hand."

Hickok was buried in Mt Moriah Cemetery (Boot Hill) in the hills behind Deadwood.  His grave is one of the popular tourist attractions to this day.

By the way, Calamity Jane is buried next to him.  This was at her request.

Deadwood has always had gambling although it was illegal.  The government turned a blind eye until 1980 when they enforced the law.  By now Deadwood was struggling to survive and after several years South Dakota allowed gambling to be legal.

Today the whole town is full of casinos, hotels, restaurants and, during the summer, lots of tourists.

Following is my picture story:

Looking down on the town of Deadwood from Mt Moriah Cemetery. 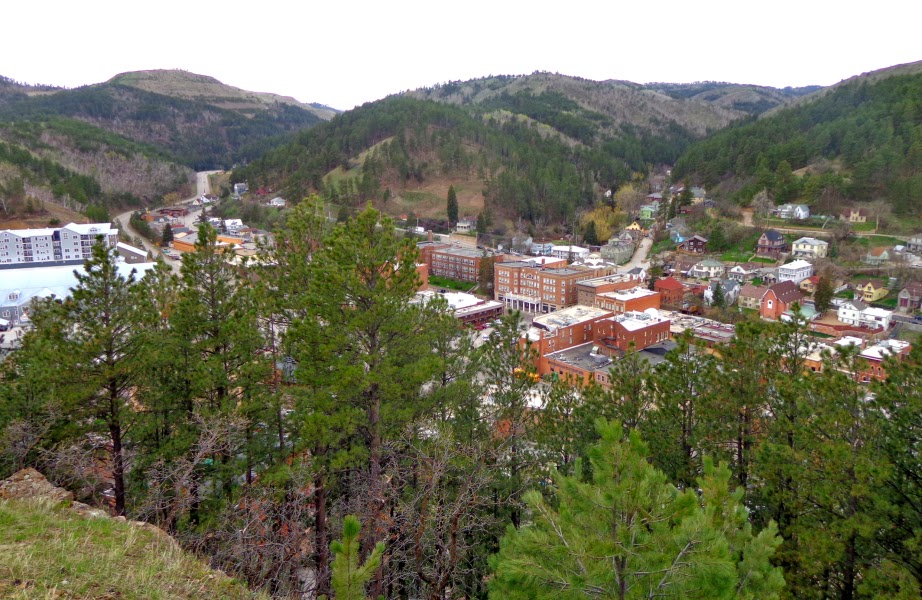 The town as it looks today. 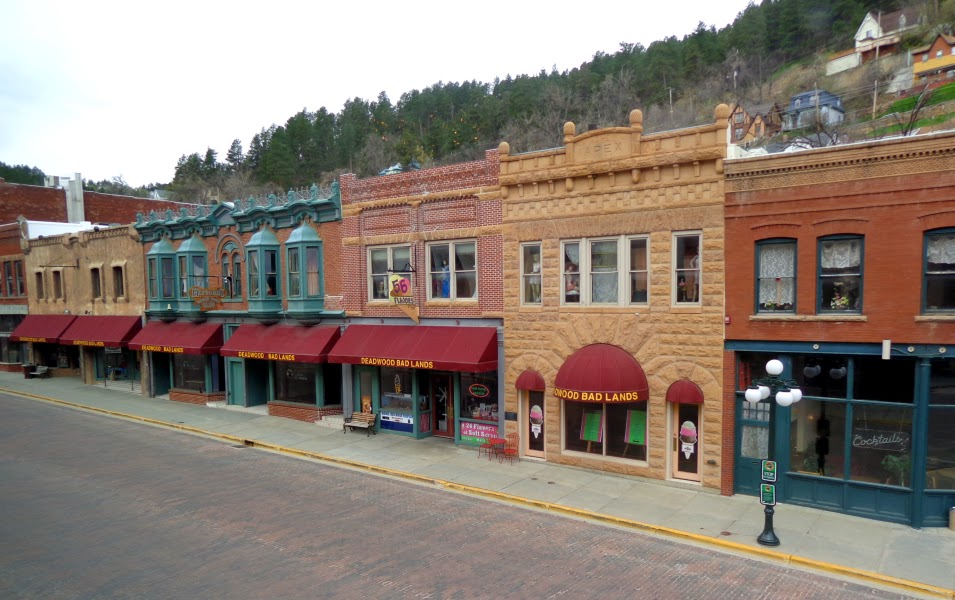 This is the saloon where Wild Bill Hickok was shot. 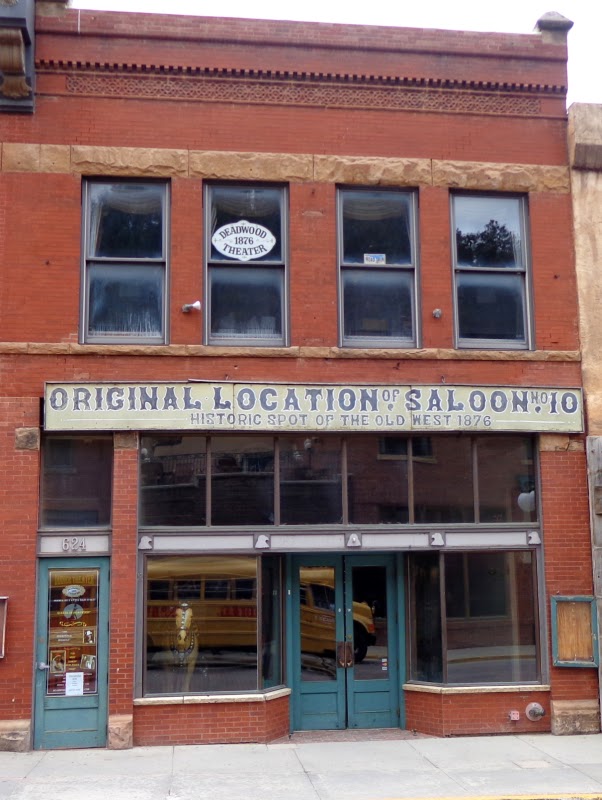 Matt is standing under the sign that designates the spot where Jack McCall was captured. 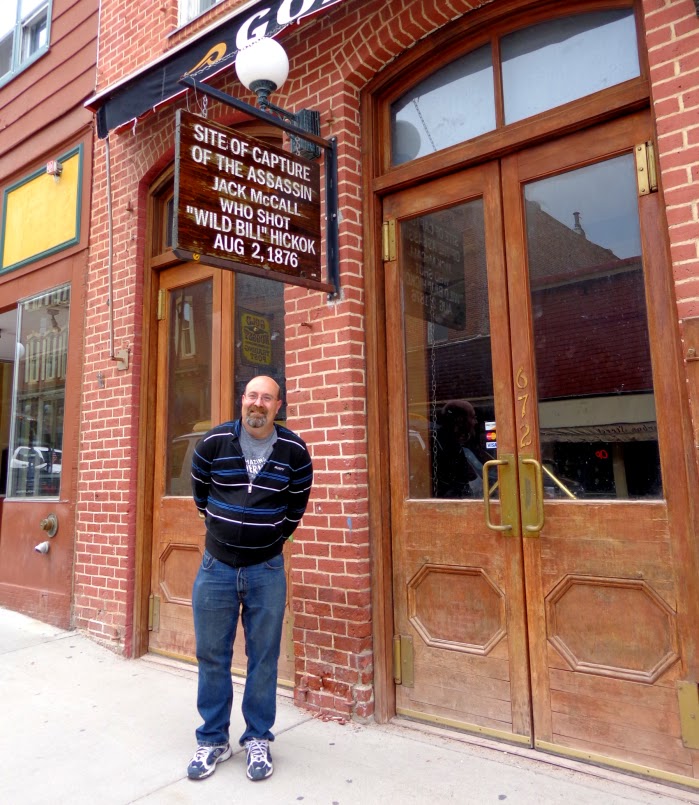 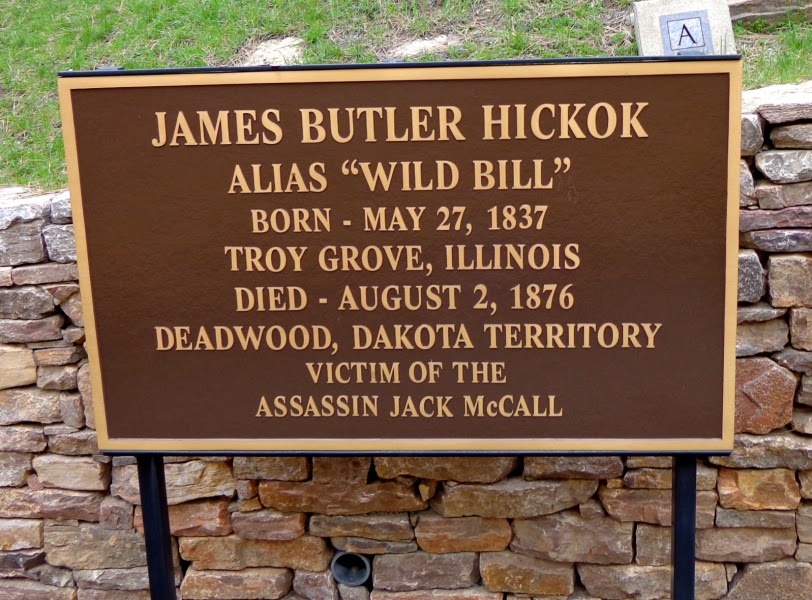 Another marker for Calamity Jane. 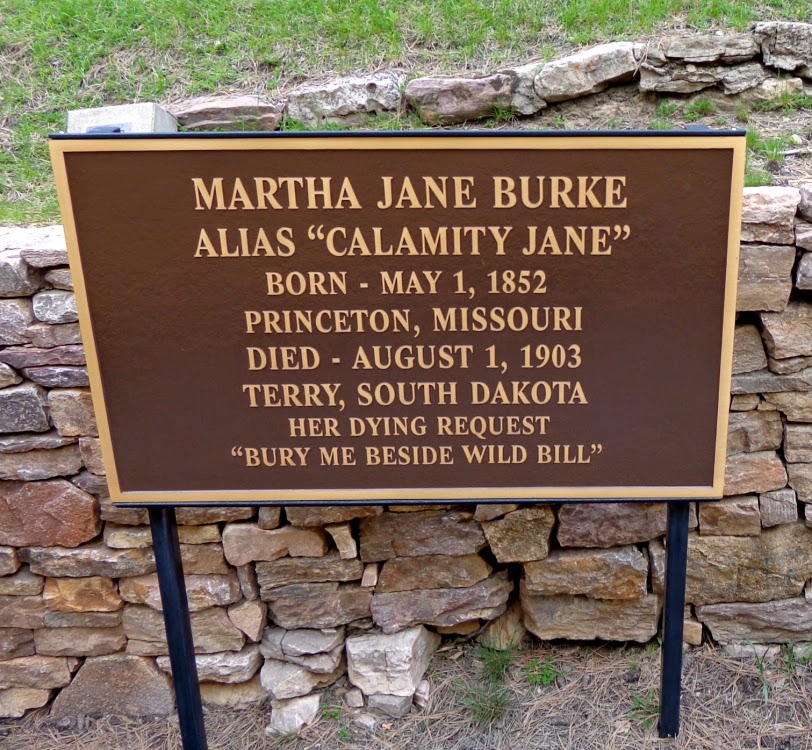 This is Wild Bill Hickok's grave. 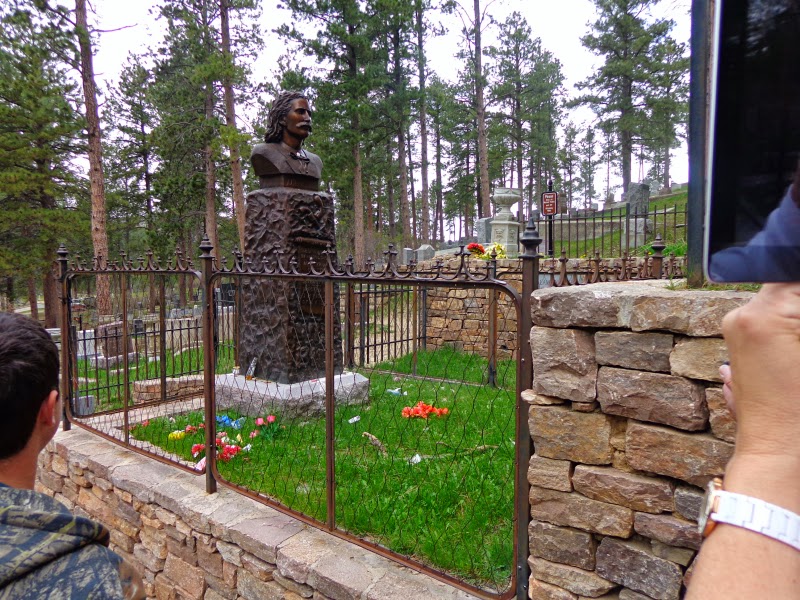 Tourists leave trinkets and money there. 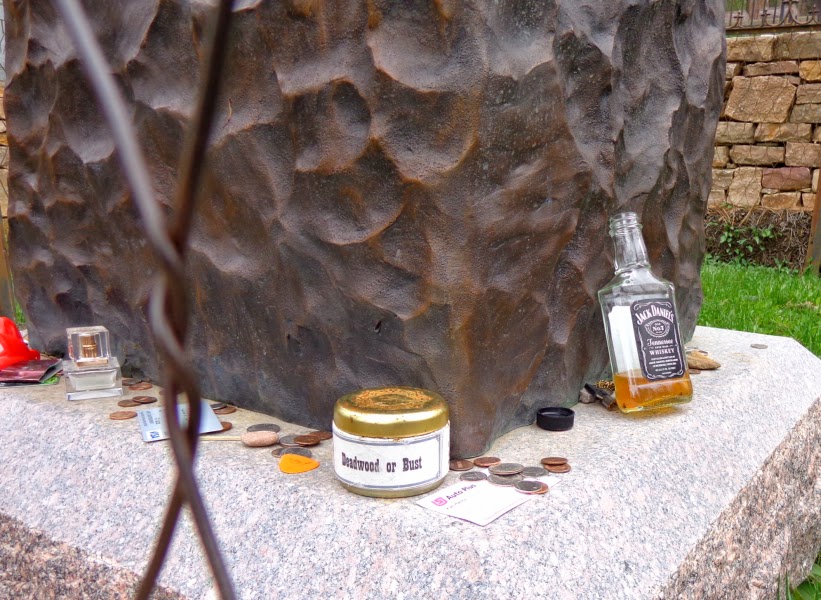 Here is Calamity Jane's grave right next to Wild Bill Hickok's grave.  Her request was honored. 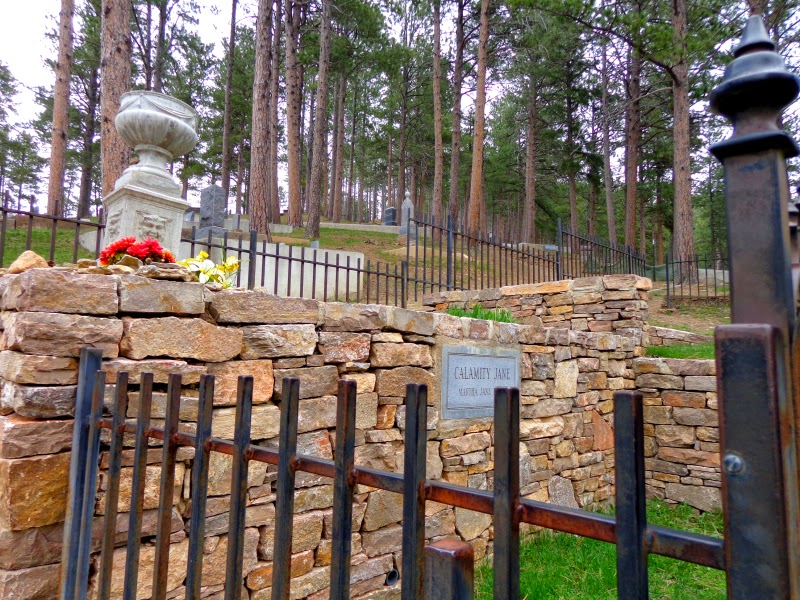 Wild Bill Hickok is so important to Deadwood that they have several statues of him around town. 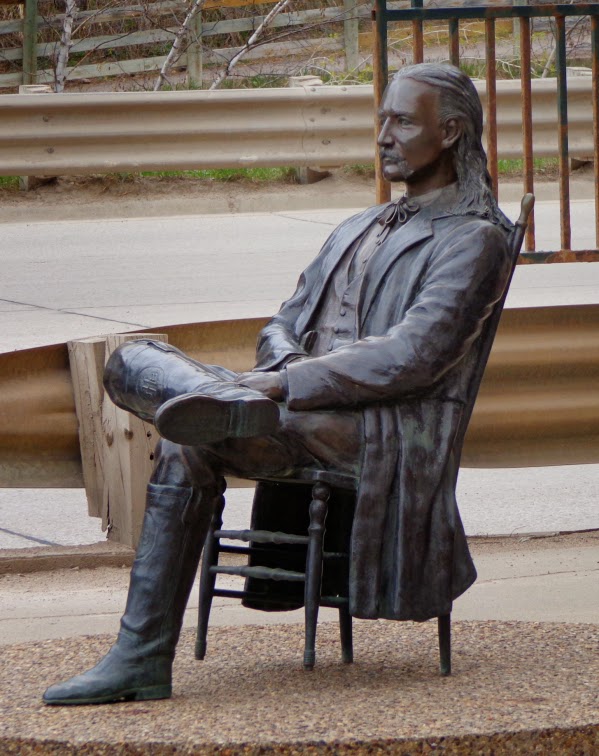 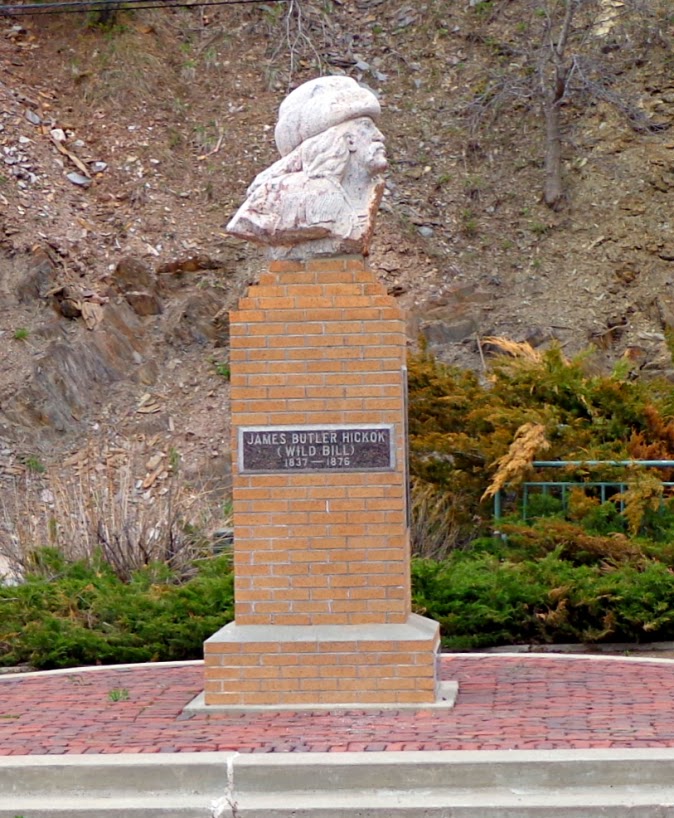 One casino even had his chair on display. 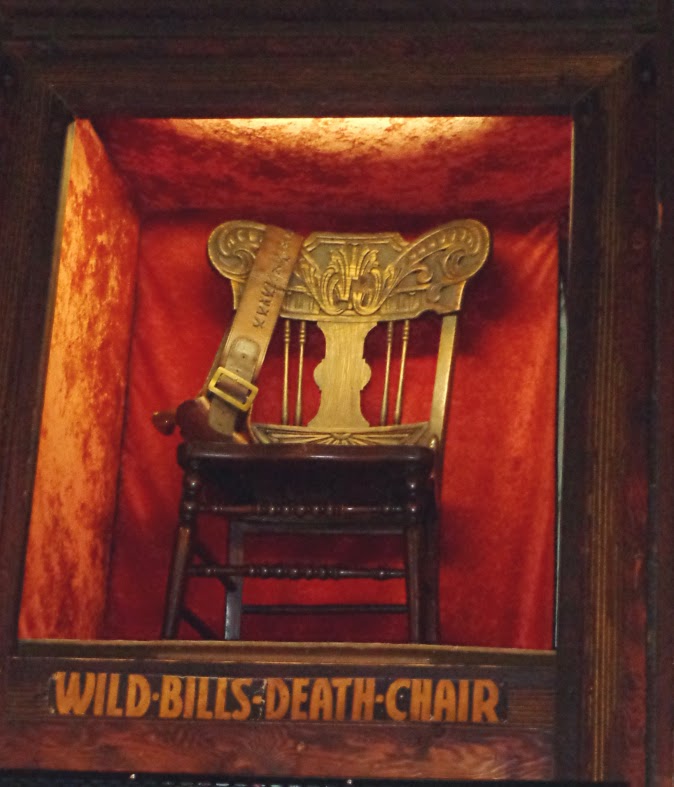 We had a fun day shopping and touring in this old town.

Our next stop is Mt. Rushmore.